In response to their posting on their facebook’s wall (15/08/12) about the following accusation:

“We had a very interesting iftar on the weekend with one of the main opposition to Save Maryam, and we realised clearly why they resisted the revival of the Islamic spirit in Indonesia. They, a small, but vocal minority, have no desire to see the revival and everyone should be careful when looking at the comments of the doubters as you have to look at who they are in many cases.” (Save Maryam, 15 August 2012)

Full text of their comment is available on http://www.facebook.com/whoismaryam
.

May this letter finds you in good health with blessed spirit of Ramadan.

Similar to the nature of Save Maryam’s campaign, you are again trying to distort the information.

I don’t believe that Christianization is the main problem in Indonesia. I said there are many other priorities that we are facing in Indonesia that needs attention. Amongst them, I mentioned education and poverty. If people are well educated and prosperous, they will not leave Islam. By working hard in developing education and combating poverty in Indonesia (for the whole nation, Muslims and Non Muslims) we’re indirectly preventing the Christianisation. If Muslims can show that that we can contribute to the development of the country and give comfort, protection, and prosperity to the nation, everyone (Muslims and Non Muslims) would have a great respect and admiration to Islam. That’s why Islam is rahmatan lil ‘alamien.

If you see the table on my note #11. The proportion of Indonesian Muslims hasn’t really changed and is relatively stable since census 1971. (This is the oldest census data I could get).

Muslim population (according to the last five national census) :

You could find the full table on the following:

I have presented the points in note #11 in the meeting that:

– Your campaign based on the wrong theory/study.

– Your report is very poor with no references to the reliable source. The only reference you made was ICG, and they already accused you of misrepresenting their report and demanded you to remove all references to them.

– You are exaggerating the statistics.

– You are making trick on your video (eg. as if 2 Million is from ICG report, and that reports indicated Indonesia will cease as Muslim’s majority by 2035).

– And I warned you that your provocative video could potentially cause a deep religious conflict between Muslims and Christians in Indonesia. It could provoke hardline Islamists to justify their violence conduct against Christians, especially in some very vulnerable conflict area, like the town of Bekasi, where the fight between two hardliners of Muslims and Christians has taken place on several occasions.

– You made ICG report as your main reference, but you didn’t know that the report is explaining in details how religious tolerance in Indonesia has come under increasing strain in recent years, particularly where hardline Islamists and Christian evangelicals compete for the same ground, especially in the town of Bekasi.

– Instead of helping Indonesia to mitigate the conflict and promote religious tolerance, you are fuelling the fire. So, there’s a little surprise if ICG accused Mercy Mission of working against the effort of nurturing religious tolerance.

At the meeting, you didn’t refute the evidence that I presented to you.

You then admitted that the 2 Million’s figure is part of the marketing campaign to raise public’s awareness. You said, if you didn’t use this branding strategy, people wouldn’t be aware, thus wouldn’t donate (you then made an analogy with launching a new iPhone). You said that campaign and implementation are two different things. For you there is nothing wrong with this marketing strategy.

So now becomes clear, there is a difference in principle. For you those manipulative actions are justified because it’s for da’wah (ummah) and part of the marketing strategy, but for us, its wrong both under the law (crime) and religion (lies).

One day you’d be surprised to see that we’re not the vocal minority.

May Allah guide me and you to the right path,

Some Other Responses from Indonesian Scholars

First, the truth is simply the truth. If you can’t defend your figure of 2 millions based on credible sources and/or evidence, you should be humble to withdraw this number and revise it. Rather than accepting your fault, you defend the number as if it comes from the Holy Quran and undermine the rigorous statistics provided by Maulana (and many others) and even calling them as a “vocal minority” and “having no desire to revive the spirit of Islam”. Who are you in the first place judging a muslim Indonesian, whoever he or she is, by not having a willingness to promote the spirit of Islam? Do you know what is inside their heart? Do you know their devotion to God? I bet you don’t. Only Allah SWT can have the capacity to know each person’s devotion. On the other hand, you may undermine Islam by saying that this campaign – based on the figure you put – is good for da’wah. Islam was and is still spread based on truth, compassion, understanding and knowledge.

I strongly support Maulana’s argument who was saying that the main challenges of muslim and Indonesian is not christianization. The biggest challenges of all for many/the majority of us are how to tackle poverty, improve the level of education, and to promote justice and fairness. And, if a muslim can show and lead these efforts, muslim will not only be respected but Islam may likely to be embraced further .

And, the solution proposed by Save Maryam by establishing a TV channel shows more about the lack of understanding of this so-called campaign. If you have gone to Indonesia and been to many areas (from urban to remote rural communities), you will realise that what many people need are simply the support to improve people’s capacity in their everyday lives, to survive, and gradually become respected human being. In addition, your type of campaign by promoting a bombastic statistic will undermine our already fragile religious peace in Indonesia. Our country is not developed in one night. Many people (muslim and non-muslim alike) have contributed to this beloved country of ours and sacrificed their wealth as well as blood. Anyone deemed to be seen disturbing this will face us, the majority of Indonesian muslims and Indonesians.”

“Just to give you a clear idea about Indonesian Islam: Thera are two largest Muslim organisations: Muhammadiyah was established 1912 and Nahdlatul Ulama was established 1928. Almost 100 years both Muslim organisations organise dakwah through thousand of schools and islamic boarding schools (pesantrens), hundred of universities, hospitals, clinics, orphanages, radio stations etc. Both organisations proselytize Islam as rahmatan lil ‘alamin. They are truly Islamic civil society groups which is absent in Muslim countries such as Pakistan, Saudi Arabi etc. Instead of importing and impossing your save maryam project, my humble suggestion, lets you and Muslim world learn from us: INDONESIAN MUSLIMS!” 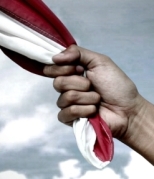 My passion is to pursue and share the knowledge of how we work better with our strengthen.
The passion is so strong it can do so much wonder for Indonesia.